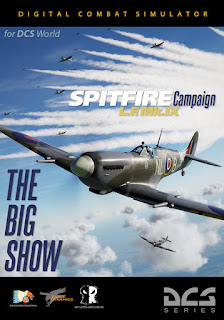 Looks like its time to grab a new campaign pack!!
Put on Pierre Clostermann’s Irvin jacket, climb into his Spitfire Mk.IX and experience the massive air battles in the skies of Western Europe described in his similarly titled book. This campaign follows Clostermann’s career from April 1943 to July 1944 through 12 missions that recreate his memoirs down to the smallest details such as time, weather, squadrons and even radio transmissions. Find out what it feels like to fly with the Biggin Hill Wing in a huge formation of Spitfires, to follow Commandant Mouchotte into gigantic melees against 30+ Focke-Wulfs, to take part in Rodeos, Circuses, and attacks on V-1 launch sites, or to support the ground troops after the D-day landings. All clear? Switches on!
Key Features:
This campaign requires ownership of DCS: Spitfire LF Mk.IX and DCS: Normandy 1944 Map.

DCS: L-39 Albatros
Two seat Jet trainer aircraft L-39C is intended for basic and advanced pilot training in visual and instrument flight rules weather conditions, day and night and also for combat use against air and ground targets.
Its development started in the middle 60s of the last century by the Czech “Aero Vodochody”. In the 70s the aircraft has entered service and is still in the operational use in over 30 countries worldwide.
The DCS L-39C is the most accurate computer simulation of this aircraft among flight simulators available for PC.
The aircraft systems, engine and weapons have been simulated in full. The professional flight model has been developed. All the real procedures are possible in two interactive cockpits. Highly detailed and accurate model of the aircraft will make you feel the unforgettable sense of flying the famous “flying school desk”, which opened the way to the sky to thousands of air forces pilots worldwide.
Key Features of the DCS: L-39 Albatros:

Send error message to the author?
(your browser will remain on the same page)

You found an error in the text:
Comment to author (optional):

Time to use up those bonus points chaps

2016
Starting today at 1500 GMT and lasting until Monday, July 18, 0900 GMT, you can spend up to 60% of your bonus points on most module from our E-Shop. This is a great way to finally spend this bonus points with a huge discount on our great modules!


Two weeks after publishing DCS 1.5.4 in Open Beta, we finally managed to clear up the critical bugs and will publish the patch for DCS World today. Thanks again for all your feedback during this short, yet very effective Open Beta phase!
Changelogs:
http://forums.eagle.ru/showpost.php?p=2820798&postcount=25
Posted by Mikee at 10:58 No comments:

DCS World 2.0 Alpha Nevada is now available for purchase and although expensive, it is a vast area with metric shit tonne of content.  One issue at the moment however is the lack of campaigns for it, so unless you like making up your own stuff, perhaps its value is limited at this moment in time.

Here is the official blurb.

This exceptionally detailed and realistic world simulation engine guarantees an engaging, real-world combat experience in this flashpoint region. DCS is a true "sandbox" simulation that can and will cover multiple time periods covering many types of aircraft and ground vehicles. DCS World allows both realistic gameplay and more casual play styles to suit the player.
Posted by Mikee at 01:44 No comments:

The M-2000C is a multi-role, French-designed, 4th generation fighter. It was designed in the 1970s as a lightweight fighter and in excess of 600 M-2000C aircraft have been built. The M-2000C is a single-engine fighter will a low-set delta wing with no horizontal tail. It has excellent manoeuvrability given its relaxed stability and fly-by-wire flight control system. The M-2000C also includes a multi-mode RDI radar that is capable tracking and engaging targets at beyond visual ranges. In addition to engaging other aircraft with cannon and missiles, the M-2000C can also engage ground targets with cannon, rockets and bombs. The M-2000C is a perfect fit for the battlefields of DCS World!

Finally taking another massive step closer to DCS World 2.0, this update changes a MASS of problems large and small, and also the way in which we add modules into the game itself. Some new modules such as DCS Mirage 2000 need this update, so get on it dudes!


Digital Combat Simulator World (DCS World) is a free, unified interface for all DCS products; you can think of DCS World as a simulation operating system. DCS modules that can plug into DCS World can include aircraft, maps, ground units, campaigns, etc. Not only can DCS World include modules developed internally by Eagle Dynamics, but it can also include those by certified third party developers.

DCS World not only includes the Graphical User Interface (GUI) that ties all DCS products together in a single installation, but it also includes the global aspects of the simulation world that pertains to all modules. This includes such items such as the Artificial Intelligence (AI), rendering system, mission editor, effects, AI units, semi-dynamic campaign system, and audio environment.

When a user purchases a DCS module, the module only includes content specific to that module. Thus, it requires DCS World to run.